Last night I posted a commentary on the President’s unhelpful and mendacious handling of the Coronavirus crisis. I appended a list of precautions to take to protect against being infected.

If everyone were to follow my advice, the epidemic would be stopped cold. The problem is that the effect on the US economy would be equally devastating. There is a very thin line between keeping the population healthy and causing an economic disaster.

The recommendations that regard personal hygiene should definitely be followed, but the others involve making difficult decisions. Avoiding crowds is recommended for personal safety, but if no one shops or goes to restaurants or theaters or hairdressers, those will quickly face bankruptcy, go out of business and drag their landlords and suppliers along with them.

Contagion travels like quicksilver and the stock market reacts accordingly. Italy is a case in point. As of today, February 28, almost 900 people in Italy have tested positive since the first case was announced on Feb. 21. Almost all the cases are clustered about Milan, a major city in Lombardy, a region in the North.

At the end of January, a Chinese tourist couple fell ill, tested positive, and was put in isolation. None of the people they had been in contact with tested positive. All flights to and from China were banned.

Then on Feb. 18, “Patient One,” a 38-year-old man, took himself to a hospital, but wasn’t tested because he hadn’t been to China. He was surrounded by other sick patients. He returned home, then back to the ER the following day because he felt worse. He was diagnosed with the Coronavirus on Feb. 20, but by then he had infected at least eight people. On Feb. 23, the Italian government cordoned off the “Red Zone,” forbidding travel in or out of the towns where the outbreak is located. Many residents were commuting to the city for work.

Though there are no known cases in Milan, the financial capital of Italy is a ghost town. The streets are deserted as anxious people stay home and workers telecommute. Schools, universities, museums, bars, restaurants, hairdressers— all closed. Most Italians are rabid soccer fans, but in the North, games are being played in empty stadia. Worried by the effect these closures are having, the authorities have declared that schools, museums and other public places will reopen on Monday, a week short of the recommended 14-day quarantine.

It’s almost impossible to navigate the strait between the Scylla of economic wreckage and the Charybdis of a decimated populace. It took less than a week for the paralysis in the industrial North of Italy to bring the third-largest economy of the Eurozone to the brink of recession. Worldwide, panic and the pandemic have caused the disruption of supply chains, postponement of travel plans and cancellation of major events, bringing the global wipeout to $6 trillion.

And yet, most people have no reason to panic if they wash their hands frequently and keep their distance from people with respiratory disease. Even if they do contract COVID-19, healthy people seem to recover without ill effects.

Who’s he working for, anyway?

Trump meets with Kim Jong Un and Vladimir Putin alone with no one but a translator from the U.S. government. These two men are enemies of the U.S.— dictators who want to conserve and enlarge their arsenals of deadly weapons and cyber sabotage. Why does Trump want to keep their conversations and pledges secret? Why did he unilaterally agree to suspend the military training exercises that stave off the Russians and Chinese from our Pacific allies?

Who benefits from Trump’s sabotaging of the Trans Pacific Partnership, his intended evisceration of NATO and alienation of our faithful allies? Could it be North Korea, Russia and China? Not the U.S., for sure.

Trump levies “protective” tariffs on U.S.-made cars and agricultural products. Trump’s base is largely farmers in rural areas and workers who manufacture products like cars. Whom is he protecting? What does he think will happen to the American jobs he promised to increase? Will the farmers and workers he courted in his campaign continue to support him when they can’t sell their prohibitively expensive products abroad? Will they understand Trump’s role in rising prices for imports — how many times do you buy something that hasn’t been made in China?— and the subsequent spike in the cost of living?

He touts the health of the economy, taking the credit that belongs to Obama. What will the Base say when Trump’s soaring national debt and his tariffs take their inevitable toll? Will the coming recession be Obama’s fault?

Your President isn’t working for you, Trumpists.

Will the truth ever percolate down to Trump’s base, or will the “alternate facts,” prevarications and out-and-out lies spouted by the dishonest “journalists” of Fox News, Trump’s enablers and Trump himself always continue to bamboozle the Trumpists who have drunk the CoolAid?

The market’s performance during his presidency is not what Trump would have us believe. Catherine Rampel (@crampel), Washington Post columnist, tweets

Presidents don’t control stock markets. But since Trump has been so fond of touting his stock market record, here’s what markets have done since inauguration for him vs. during same period in Obama’s presidency. Net gains was  [sic] more than double at this point under Obama. (Emphasis mine) 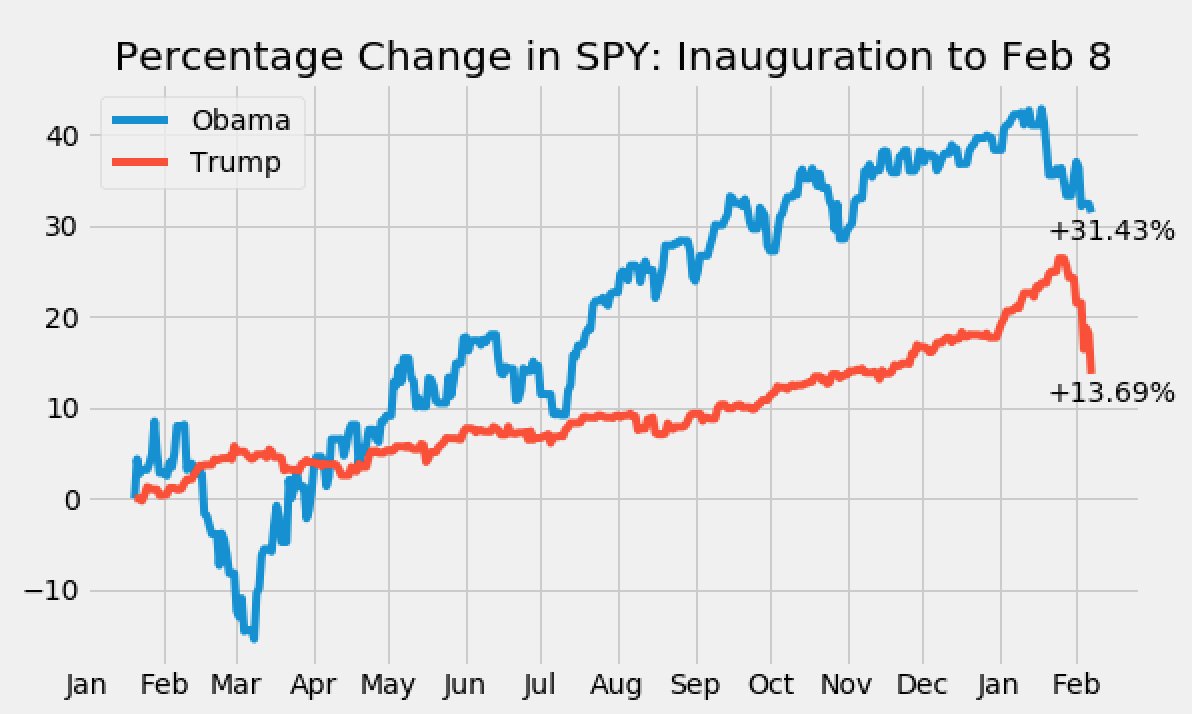 First, Trump’s plan is not really an infrastructure plan. It’s a tax-cut plan for utility-industry and construction-sector investors, and a massive corporate welfare plan for contractors.

Abraham Lincoln,  in addition to being the Great Emancipator, turned out to be quite prescient. He warned of the peril of granting too much power to the banks and corporations (now hedge funds and multinationals), of corruption in high places (think special interest lobbies and PACs) and the concentration of wealth in a plutocratic oligarchy that will do away with American democracy:

The money powers prey upon the nation in times of peace and conspire against it in times of adversity.  The banking powers are more despotic than a monarchy, more insolent than autocracy, and more selfish than bureaucracy. They denounce as public enemies, all who question its methods or throw light upon their crimes…. corporations have been enthroned and an era of corruption in high places will follow, and the money powers of the country will endeavor to prolong their reign by working upon the prejudices of the people until all wealth is aggregated in a few hands and the Republic is destroyed.

END_OF_DOCUMENT_TOKEN_TO_BE_REPLACED

Dems ran away from their successes

Voters care a great deal about the economy. Obama lowered both the unemployment and the underemployment rate. The number of new jobs has been increasing for 55 consecutive months, and the deficit has been slashed. Yet Democratic candidates ran away from Obama and failed to mention these achievements.

Under the ACA (Obamacare), millions now have health insurance who didn’t have it before, and healthcare costs are actually falling, contrary to Republican predictions. Democrats kowtowed to the perception that the ACA isn’t working, rather than show how much better off many millions are.

A few Democrats weren’t afraid of touting the Administration’s successes, like New Hampshire’s Jeanne Shaheen. She held on to her Senate seat.

The other cowards slunk away in ignominious defeat.

Most Democratic candidates deserved to lose

Instead of standing up to Republican critics of Obama, Democrats disowned the president. All they had to say is “Are you better off today than you were when Bush left office?”

By hiding Obama, they tacitly confirmed the lies about him being spread by their opponents. Not that we’re not facing serious problems, e.g., immigration.

But Democratic candidates failed even to mention, let alone emphasize, that during Obama’s presidency,

The losers could have mentioned at least some of these accomplishments.