California is burning with no end in sight. People are dying, houses are blackened hulks, forests are decimated — Why? Why is the Golden State an inferno with flames incinerating homes and trees in hills and valleys?

Several factors come into play, but all are linked to climate change. Global warming in California has resulted in shorter winters and reduced snowpack. The fire season starts earlier and ends later each year. With warmer spring and summer temperatures, drought is inevitable. Starved of moisture, vegetation and the soil are desiccated by the dry, intense heat. Undergrowth in the forests becomes abundant kindling that can ignite spontaneously, and the trees, stressed by extreme heat and lack of water, are unable to withstand the flames.

The Santa Ana winds rush from high pressure areas in the mountains to lower pressure at the coast. Channeled through mountain passes and canyons, their velocity accelerates, and the lower pressure compresses, warms and dries them out. The winds augment the parching of extreme heat and drought. Once the underbrush ignites, the wind propels and nourishes the wildfire, easily driving it across thousands of acres.

Though wildfires are a natural part of California’s bioregion, the fire season is an estimated 75 days longer now. The trends of rising temperatures and decreasing rainfall are expected to continue, and wildfires will keep pace. Each year during this decade has experienced a more destructive fire season, and there is no reason, given the paucity of effort in capping or lowering emissions, to expect deviation from this ominous trajectory.

An alarming, just published, report from Climate Central warns that flooding projected across the globe by 2050 will be far worse than previously thought. The areas affected are mostly in Asia, where millions live on or near the coast. Flooding by seawater implies not only inundation of homes, but the salting of cultivated fields. Worldwide, chronic floods will endanger 300 million people. By the end of this century, the high tide line will be permanently higher than the land where 200 million people now work, farm, and call home.

These dire predictions result from the discovery that coastal elevations are actually lower than previously estimated; hence more vulnerable to flooding, inundation and the contamination of freshwater. In fact, the incursions of saltwater could make the land uninhabitable even before it disappears under the sea.

The previous estimates of land elevation were calculated using data produced by satellite photography, which sees the tops of trees and buildings, thus overestimating the elevation of the land. The problem is particularly acute in areas of dense forest and close clusters of buildings. More accurate means of measurement, using lasers and overflights, are expensive and consequently not widely used.

Cities on the world’s coasts are the most densely populated areas on the planet, and most of them have low elevations. The older elevation estimates have been found to be too high on an average of approximately six to eight feet, which is the same as or even more than the highest sea level rise projections for all of the 21st century. The elevations of some American cities, including New York, Miami and Boston, were overestimated by an average of 15.5 feet.

As we now know, the rise in sea level occurs when the combustion of fossil fuels and other emissions caused by human activity pollute the atmosphere. The planet grows warmer, causing glaciers and ice sheets to melt and flow into the oceans. The increased volume of water raises the level of the sea.

The estimates of the number of people who will lose their farms and homes to floods of saltwater are based on moderate emissions cuts mandated by the Paris climate accords. (We are not currently meeting those goals.) If pollution and the subsequent greenhouse gases continue to increase, by the end of the century chronic flooding and permanent inundation will imperil the land that shelters and feeds 640 million people living now (actually more; based on 2010 data), close to 10 percent of the global population. Ironically, the people most likely to suffer are the ones least responsible for polluting emissions.

The United States is already experiencing the predicted effects of global warming. Hurricane Harvey caused epic flooding in Houston; diseases once confined to the tropics are increasingly occurring in the temperate zone; extreme heat is responsible for a sharp increase in deaths in Nevada and Arizona; wildfires are consuming California . . .

The loss of land and the resulting migration of climate refugees will surely give rise to humanitarian crises of unprecedented severity and have devastating effects on the world economy. Other aspects of global warming like drought and extreme heat will also have catastrophic consequences. All living creatures, from plants to insects, fish, birds and humans will have to flee their habitats and invade others. Some will survive; many won’t.

The History of the World in two minutes

You may have seen this, but even if you have, it’s worth watching again. There is so much crammed into two minutes that you can’t look away even for a nanosecond. The imminent future is included too. It’s a future that’s not too hard to predict.

Extreme weather events like last year’s drought, catastrophic hurricanes and the upward trend in annual temperatures don’t convince the skeptics. Unlike conservative politicians in other countries, Republicans, especially Tea Party members, continue to deny the climate changes that the U.S. and the rest of the world are experiencing. The Pew Research Center reported last October that 56 percent of Democrats believe global warming is a big problem, but only 19 percent of Republicans do. Why? Why do Republicans dig in their heels in the face of so much evidence?

For one thing, libertarians and the extreme right, the same people who arm themselves against a despotic government takeover, are fond of conspiracy theories. They fear that warnings of global warming may be an excuse to raise taxes, part of a plot to take away their freedom and destroy jobs with laws like cap and trade. Republican political strategist and energy lobbyist Michael McKenna said the issue “is a surrogate, a totem for how you feel about large government versus small government.”

END_OF_DOCUMENT_TOKEN_TO_BE_REPLACED

Scientists and the readers who follow them know that the earth is warming very fast, even faster than anticipated. Ten of the last 15 years were the hottest ever in the U.S., and 2012 was the hottest of all. The worst drought since the Dust Bowl of the 1930s parched 64 percent of the lower 48 states, killed livestock and wiped out crops, resulting in a multi-billion dollar loss to American agriculture. Wildfires fueled by the heat and the drought laid waste to vast expanses, the largest on record.

The rising temperatures on land and sea contributed to changes in weather patterns and extreme events in both hemispheres. (See the map above here.) China is in the grip of its coldest winter in 30 years; more than 650 people died in the frigid cold that froze most of Eurasia; floods inundated Pakistan, the U.K. and the Middle East; the strongest typhoon ever in the Philippines killed more than 900 people; severe snowstorms battered Sicily and southern Italy; Brazil is sweltering in record heat; snowstorms crippled the Middle East — and this is only a partial list of disasters attributable to global warming. 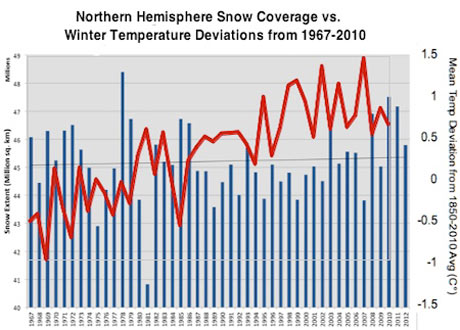 The mean temperature deviations recorded since 1967 are graphed in red. They clearly indicate a definite warming trend over 43 years. The snowfall amounts (in blue), however, don’t correlate at all with the temperatures.

Climate change means an increase in extreme weather events like recent superstorm Sandy, as well as extreme temperatures on both high and low ends. A week of frigid temperatures from the Great Plains to the Northeast doesn’t contradict the warming trend of the planet. Writing in the Guardian, Blogger Harry J Enten warns that

It’s important to remember that the last few days are a very small location and sample size. While the east is a tundra, Denver, Colorado is dealing with near-record highs with temperatures in the 60s. When we expand our look to over the past month, record high maximums and minimums are running 2 to 1 ahead of record low maximums and minimums in the United States. The United States’ average temperature in 2012 was 55.3F – 3.2F above the 20th-century average and 1F above the previous record, 1998.

Weather patterns have very many variables, which makes them incredibly complex. It’s the trends that are telling, much more than individual events.

If you don’t see the image, try viewing it in another browser. Chrome works.

And if you still can’t see it, go here.

Each year, four international science institutions compile temperature data from thousands of stations around the world and make independent judgments about whether the year was warmer or cooler than average. “The official records vary slightly because of subtle differences in the way we analyze the data,” said Reto Ruedy, climate scientist at NASA’s Goddard Institute for Space Studies. “But they also agree extraordinarily well.”

All four records show peaks and valleys in sync with each other. All show rapid warming in the past few decades. All show the last decade has been the warmest on record.