Thanks to Ruth Bader Ginsburg

Every single woman stands on the shoulders of this tiny giant every second of every day; there are not enough thanks in this world for Justice Ginsburg.

RBG, Nina Totenberg and the friendship that bound them

This morning I read Nina Totenberg’s tribute to Ruth Bader Ginsberg and their 50-year friendship. Lovingly written, the NPR obituary is a series of vignettes that

have little to do with her brilliance, hard work or devotion to the law, or even her pioneering role as the architect of the legal fight for women’s rights in this country.

they are examples of her extraordinary character, decency and commitment to friends, colleagues, law clerks — just about everyone whose lives she touched. I was lucky enough to be one of those people.

The first story Totenberg relates about her friendship with RBG reveals the depth of the future Justice’s commitment to her friend:

She was still on the D.C. Circuit in 1988 when the Cosmos Club, after years of effort from many of its male members, finally voted to admit women. Against my better judgment, I agreed to be proposed as one of the first female members. But, as it turned out, I was blackballed. While I was happy not to have to pay the significant fees associated with membership, the truth is I was really hurt, and I must have told Ruth about it.

Some time later, RBG was invited to visit the club, and at the end of a tour of its lovely interior, her escort invited her to become a member. As the story was related to me, Ruth paused, and in that quiet, low voice of hers, said to her escort, “You know, I think that a club that is too good for Nina Totenberg is too good for me, too.”

The story of two women, reporter and Supreme Court Justice, and their friendship despite their potentially adversarial professions touched me deeply. If you have read this far, I am sure you will enjoy “A 5-Decade-Long Friendship That Began With A Phone Call.”

And the stars fell out of heaven and the moon could not be found
The sun was in a million pieces scattered all around
Why did you ever leave me, you knew how it would hurt
And now there’s darkness on the face of the earth

—Willie Nelson, Darkness on the Face of the Earth

The apocalyptic events of 2020, all coming together, are overwhelming. People are dying. 200,000 dead! and millions infected. Mind-boggling. As are the fires on the West Coast. Who ever heard of orange skies? The pictures are beautiful, awesome, and horrifying. Disasters of epic proportions. Fire tornadoes, flooding, hurricanes, ashy skies– Loss and death and destruction everywhere.

But all that wasn’t enough. Ruth Bader Ginsburg, feminist icon, extraordinary legal brain, unflagging energy, is GONE. After a long, difficult bout with cancer, we should be happy that she is finally relieved of her pain. She was 87, after all; she lived a full life, by any standard.

But today the world is upside-down. Truth is becoming an extinct commodity, and half the country is convinced that everyone else is deceptive, cruel, and scheming to take over the government or what’s left of it. The other half believes the others are ripping the country apart, snuffing out democracy, shredding the Constitution. The freedom and the ideals that we aspired to, but never quite reached, are dissolving. A nightmare.

Is the world truly coming to an end? 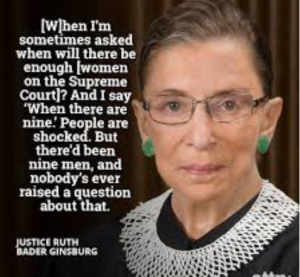 I had heard “RBG,” the movie that celebrates the life and accomplishments of Justice Ruth Bader Ginsburg, was good. But I wasn’t prepared for how moving it would be for someone who lived through the times that RBG did so much to change.

If you remember when women’s minds were not valued and their voices barely heard, you’ll enjoy watching the amazing and Notorious “RBG.” If you’re too young to remember, then see it and learn. You’ll appreciate how different your life is from your mother’s (or grandmother’s) because of RBG’s legal triumphs.

“RBG” is a love story. The marriage of Ruth and Marty is lovingly told, as is her fierce belief in the Constitution and her crusade for equal rights.

The movie is fun to watch. The montage of old clips and photos interlaced with Ruth speaking her mind today is very well done. It’s also au courant— Ruth’s kids say she never watches TV, but we see her watching Kate McKinnon’s recent impersonation of her on SNL. She rocks with laughter, her usually sober demeanor dissolving.

Supreme Court justices are human beings and as such they have biases. The difference between them and everybody else is that they don’t express their opinions publicly.

Except when they do.

Justice Samuel Alito mouthed “not true” on national television in defiance of President Obama at the 2010 State of the Union. The President had just criticized the 10-day-old Citizens United decision. In the last week, Justice Ruth Bader Ginsburg denounced presumptive Republican presidential nominee Donald Trump, calling him “a faker” who “really has an ego.”

Expressing these sentiments publicly landed her in hot water. Trump called for her resignation and Republicans deplored her action. No surprise. But so did just about everyone else, including liberals and progressives. What was shocking was where she said it, not what she said. No one doubts that she is a liberal Democrat. No one could expect her to back Trump and his unconstitutional proposals that jeopardize the freedom of the press and the rights of free speech and religion, due process and equal protection.

Perhaps RBG believes the prospect of a Trump presidency is so dangerous that she was willing to scrap protocol and jeopardize her legacy to cry out from her bully pulpit.

To preserve the appearance of impartiality and foster faith in Supreme Court and its ruling, the justices don’t take sides in public. The fear now is that RBG might be forced to recuse herself in any case involving Donald Trump. But that is unlikely. In the history of SCOTUS no justice has been compelled to recuse him or herself.

No, Justice Ginsburg dreads Trump’s disregard for the law and willingness to trash the Constitution. I believe that she may well have gone out on a limb in a valiant, though reckless, effort to preserve American democracy.

My ideal candidate to replace Justice John Paul Stevens on the Supreme Court is a brilliant, young, Asian-American Protestant lesbian with finely honed negotiating skills acquired perhaps in the legislature, but not on the bench. We don’t live in an ideal world, of course, so it is exceedingly unlikely that we’ll see all these qualities united in one person. Let’s consider each on its merits. END_OF_DOCUMENT_TOKEN_TO_BE_REPLACED