Last week Putin’s intentions and Russia’s invasion of Ukraine were being evaluated differently in Washington and Kiev. U.S. intelligence was predicting an imminent invasion, publicized by Pres. Biden, but Pres. Zelensky downplayed the threat, perhaps wanting to believe a possible Russian incursion might be a ways down the pike and not wanting to panic the Ukrainian public.

Until now we didn’t know that the invasion was stalled because Putin was acquiescing to Xi Jinping’s request that he wait to attack until after the Winter Olympics in Beijing were over. The two leaders met just before the Olympics and issued a joint statement affirming that their partnership would know “no limits.” Russian soldiers crossed into Ukraine days after the Olympics ended, following the playbook laid out by the U.S.

But China hasn’t endorsed Putin’s war. It is in a delicate position: China has pledged a partnership with Russia, but now can’t bail Russia out without risking a rift with its primary trading partner, the United States. No matter what action it takes, China will alienate either the U.S. or Putin. It can’t make up Russia’s deficit caused by Western sanctions without jeopardizing its relationship with the U.S.

The surprising resilience of the Ukrainians has so inspired the West that it has responded in ways no one could have anticipated (see Zelensky and the World v. Putin and Russia). The most astonishing result of Putin’s unprovoked aggression is the shoring up of the alliance of the free world on every continent. The solidarity with Ukraine and the outpouring of financial, military and moral support is completely contrary to Putin’s assumptions that the West is too weak and fat to execute harsh sanctions and withstand the consequent hardships like runaway gas and oil prices. The former U.S. president had done his best to rupture the bonds of NATO, but Putin (to his undoubted dismay) has singlehandedly revitalized the alliance. Even the warring political parties of America have found common ground in opposing the invasion.

The world has undergone a transformation. 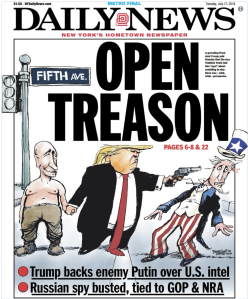 “I see no reason why Russia would [interfere with our election].” —Donald Trump in Helsinki, July 16.

“I meant to say  “wouldn’t” instead of “would”” —Donald Trump, reading from notes, White House, July 17.

A frantic White House understood what the President didn’t. The country was shocked and furious that the U.S. president, standing next to Putin and speaking to the world, repudiated the findings of his own intelligence agencies and believed Putin’s “strong and powerful” denial that Russia had interfered in the U.S. 2016 election.

In the face of strong criticism from both parties, Trump’s associates somehow persuaded him to walk back his remarks. He read from a prepared statement, a giveaway that the remarks were not his, and certainly not from the heart. He never reads from notes at his rallies.

Expecting the public to believe that he misspoke, omitting a mere 3-letter word, after praising Putin and Russia, is too much. As he did after the Charlottesville, Va, racial confrontation, Trump could not bring himself to completely renounce his remarks. He defended his observation that there were “some very fine people” among the white supremacists in Charlottesville, saying there were people to blame on both sides. Now, as he  did then, Trump said that the U.S. was as much to blame as Russia.

New York’s “Daily News” front-page reaction shows Trump shooting Uncle Sam on Fifth Avenue while holding Putin’s hand. Trump once said he could shoot someone on Fifth Avenue in plain sight and suffer no consequences. Up to now, he was right. We’ll see what happens after today’s uproar, whether the Republicans who were publicly stunned by the U.S. president blaming America for problems Russia created will swallow his explanation of behavior that they found disgraceful (one of Trump’s favorite terms of opprobrium).

I wonder, does Trump realize that Putin ate his lunch in Helsinki?

Here we go— Bombs away!

U.S. warships in the Mediterranean sent about 60 Tomahawk missiles blazing into a Syrian air field, reports the A.P. The bombing was retaliation for the chemical attack launched from that same field that killed dozens of Syrian citizens.

Apparently Trump was moved by the horrible pictures of victims suffocating and writhing in pain. The president’s volatility is notorious; time and again he has been swayed by what he sees on television. Now, clearly afraid of being thought weak or indecisive, he has launched missiles rather than tweets. Is he trying to prove that he is strong where Obama was “weak” for resisting the commitment of even more boots on the ground? Of starting another war we can’t afford?

Throughout his campaign, Trump insisted that we had no business in Syria, that it could take care of itself. But a picture is worth a thousand words, as they say, and now Trump’s committed an act of war.

What’s next? That may depend on how many Russian nationals are killed. Syrian rebels are being massacred and the refugees are increasingly finding most roads out of the horror barricaded against them. A response, on humanitarian, if not political, grounds is severely warranted. But what form should it take? Syria is a Gordian knot. Any strategy to disentangle it will reverberate within the middle eastern minefield with unknown but definitely adverse consequences.

The Russians have been supporting Assad against the rebels who want to oust the tyrant. Syria’s weapons defense and warplanes are Russian-built, and Putin has steadfastly resisted multilateral attempts to oust Assad. Will Trump’s palship with Putin weather this military offensive or will Putin take advantage of Trump’s aggression and attack us elsewhere? Trump has opened the proverbial can of worms.